Indy Johar is an architect, co-founder of 00 (project00.cc) and a Senior Innovation Associate with the Young Foundation and Visiting Professor at the University of Sheffield.

Indy, on behalf of 00, has co-founded multiple social ventures from Impact Hub Westminster to Impact Hub Birmingham and the HubLaunchpad Accelerator, along with working with large global multinationals & institutions to support their transition to a positive Systems Economy. He has also co-led research projects such as The Compendium for the Civic Economy, whilst supporting several 00 explorations/experiments including the wikihouse.cc, opendesk.cc. Indy is an Advisor to the Earth Security Initiative and a director of WikiHouse Foundation.

Indy Johar is a co-founder of the Project00.cc Research Laboratory & Skunk Works.

Dark Matter labs aims to apply complex systems science to Urban & Regional Renewal; turning what is generally perceived as a threat of our time – spill-over effects across borders, boundaries and silos – into a resource to solve the wicked challenges society faces in the 21st century.

Dark Matter Laboratories utilises an experimentation method typical of a fieldwork scientific laboratory, we undertake real-world research and prototyping inorder to seed the next generation of 21st Century institutional infrastructure. We are currently working on a range of initiatives from developing a new class of System Change – Impact funds, to @Town_halls for Social Innovation, to the development of a new generation of Polytechnics, and the transformation of numerous existing institutions.

Indy is a Fellow of the RSA, Respublica Fellow, JRF Anti-Poverty Strategy Programme Advisory Group member and a member of the Mayor of London’s SME Working Group and most recently a member of the RSA Inclusive Growth Commission.

Indy was Director of the Global Impact Hub Association and Impact Hub Islington [the original Impact Hub in the Hub Network] and worked with Jonathan Robinson to design the protocols and modes of the network scaling.

Indy has written for many national and international publications on the future of design, systems change and social investment. 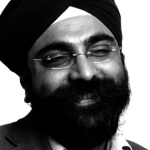