He teaches in the graduate department of the School of Visual Arts in New York and has been appointed as the Frank Stanton Chair at the Cooper Union School of Art, New York.

His motto is ‘Design that needed guts from the creator and still carries the ghost of these guts in the final execution.’

Stefan goes on a year-long sabbatical around every seven years, where he does not take work from clients. Several years ago he decided to dedicate 25% of his work to the art world, things like books and publications for galleries, another 25% to the scientific community, 25% to social causes, and the remaining quarter has stayed dedicated to the music industry. 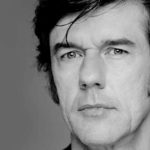