Anna Pickard has spent a long time pretending to be other people. After training as an actor, and then segueing into dramaturgy when she realised she was too shy to act, she went from a small blog into a series of frankly ridiculous career moves: candle making, script editing, TV criticism, advertising and the games industry. For Glitch, a beloved but now-shuttered MMO, she gave voice to strange butterflies and surfer pigs; for Wieden+Kennedy she brought life to criminal cat masterminds and omniscient butter gods; for educational games studios, she turned mathematical concepts into friendly faces.

Now, as Creative Director of Voice and Tone at Slack, she’s pretending to be a competent grown-up professional. One in charge of bringing a human approach to business, and maintaining the energy, entertainment, values and voice of the fastest growing piece of business software ever.

Check out Anna Pickard and Bobbie Johnson’s workshop: Clear, Concise and Human – Finding your writing voice and using it on Tuesday 13 February. 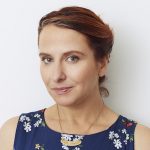