Trevor Paglen is an artist and geographer whose work spans image-making, sculpture, investigative journalism, writing, engineering, and numerous other disciplines.

In 2017 , Trevor was named a MacArthur Fellow for his work revealing the secret world of U.S. military operations and corporate power through a mixture of artistic photography, cartographic analysis, and boots-on-the-ground geography. He uses public records and field work to bring public attention to the secrecy surrounding government surveillance, warfare, and social control. For his projects he has photographed locations of covert government actions such as Area 51, the “Salt Pit” prison in Afghanistan, and the skies in search of drones, military aircraft, and espionage satellites.

Paglen’s spectrum of work includes both written publications, as well as artistic pieces serving as an excellent example of the emerging field of geohumanities. Through written works, such as Blank Spots on the Map: The Dark Geography of the Pentagon’s Secret World or Torture Taxi – On the Trail of the CIA’s Rendition Flights, Paglen maps onto paper those areas in which the government has tried to keep hidden, asking his readers to think about the societal implications of secrecy in a democratic state. In more recent work, The Last Pictures speculates on satellites orbiting earth as artifacts of 20th and 21st century civilization. Paglen’s artwork is wrapped up in his written projects and contains photographs of secret sites, military aircraft, and satellites. His pieces have been featured in locations ranging from the galleries of New York City to the Fukushima Exclusion Zone in Japan to a gold disk launched into outer space.

Currently residing in Berlin, Germany, Paglen holds a B.A. in Religious Studies from U.C. Berkeley, an MFA from the Art Institute of Chicago, and a Ph.D. in Geography from U.C. Berkeley (class of 2008). His work has been highlighted in CityLab, The New York Times, The New Yorker, Vice Magazine, Artforum, and The Colbert Report. Paglen also received a 2014 Electronic Frontier Foundation Pioneer Award which recognizes individuals who are extending freedom and innovation in the realm of information technology. 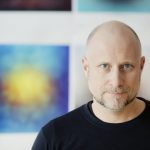