1) Who are you?
This is a weird question—you sent me this email, you should know who I am. Anyway, I’m Frank Chimero. I’m a designer who writes. I live in New York.

2) What do you do?
See above. I also spend a lot of time thinking about dogs and music. Again, another weird question.

3) How did you end up here?
Took the Q train to Atlantic, then got on the Long Island Railroad to Jamaica Station, then got on the AirTrain (not an actual train in the sky, but one that goes to the airport) out to JFK, then flew to LA, got on another plane, lost a day in the air, landed in Auckland, then boarded a little puddle jumper out to Wellington. Other than that, I spent about a decade designing publications and things for the internet, and about seven or so years writing about everything I learned/decided/unlearned.

4) What are the most important issues currently in your field?
I design things for the web, and the web’s problems are the world’s problems: privacy, equality, corporate ethics, consolidation, wealth distribution, and an over-saturation of loud, fast, and stupid. Now I’m bummed. See what you did?

5) Tell us more about your talk at Webstock – why should folks come listen?
Here’s the thing: we actually do a pretty poor job of getting down the big patterns of making things for screens. Maybe we take our knowledge for granted, maybe we lack words, perhaps its the absence of a catchy conceptual framework—whatever. At the end of the day, if you want to honor making things for the web as a proper craft, I believe it’s necessary to think about the natural grain of the web and how it guides your work. You need to understand it as a material to work with and not a canvas to paint on. It’s not blank—the web has certain things it wants to do. I’ve been trying to spell out my version of these things for a while. This talk is the back half of a lecture I gave last year called What Screens Want, where I dig into what it means to natively design for screens. That last talk focused on flux, or the capacity for change. This time I’m tackling edgelessness.

7) Tell us three things you love (eg movies, albums, songs, poems, artifacts) and why.
This is 30 minutes of kinda ambient synth music for plants. And I like it, too! Funny story: the only way to get this record was to buy a mattress from a Simmons dealer in southern California in 1976. Logical.

Let’s spend a long time looking at this photo of Twiggy and Richard Avedon dancing at work. Let’s not forget to have that much fun sometimes, ok?

This drawing, for obvious reasons.

Our fourth Start-up Alley, in conjunction with BNZ, saw a strong and stirring range of entries. We would have loved to showcase every entry, but due to rules, only six finalists could be selected..and here they are.

Good luck to all of them!

“We’re ecstatic to be included as a finalist in Webstock! Yay!

Banqer is a platform for teaching financial literacy; think online banking for kids matched with purpose built teaching resources. It all comes together in the classroom to help teach financial life skills in a fun, engaging way that’s inline with the New Zealand curriculum.

“We’re excited about testing FactorFree in the cauldron of BNZ Start-up Alley! Online security is something we all know we should take more seriously, but in real life, it’s normally too much hassle. FactorFree removes the pain of security with a service that adds high-security multi-factor login to a website so seamlessly that users will be protected without even noticing it.”
– Carl Penwarden – FactorFree

“We’re transforming a 180 year old coaching model, desperate for innovation. Moxiee finally lets health, fitness & wellness coaches scale their business and change more lives than ever before. I can’t wait to go to my first Webstock, and I see BNZ Start-up Alley as the perfect stage to take Moxiee to the world.”
– Alex Asher – Founder of Moxiee

“Rave Build is a complete Enterprise Management Software for residential builders. Our cloud-based system helps homebuilders and subcontractors save time and money by managing their businesses with efficiency never before possible. We are delighted to be selected as one of the BNZ Start-up Alley finalists and look forward to taking part.”
– Barry Ward – Rave Build

“We’re thrilled to be finalists in this year’s BNZ Start-Up Alley and will look forward to introducing Syngency’s cloud platform for modelling, talent and acting agencies to everyone at Webstock this year!”
Ryan Marshall – Syngency

“Have you ever spent hours researching something online? Did you end up with 80 tabs open and a foggy head—wondering ‘What was I even looking at?’

Trailblazer fixes that. It’s an upgrade to Google Chrome which turns your research into a glanceable map. It shows you where you were, how you got there and what was important. You can pick up the trail again whether it’s 3 minutes or 3 months later.

We can’t wait to connect with all you lovely people at Webstock. Keep an eye out for us on Twitter (@TrailblazerApp) and in person. Look for the man wearing inappropriate goggles.”
– Andy Wilkinson – Trailblazer

Yes folks, it’s that time of the year where Webstock Santa makes an appearance. We have tickets to give away to the main Webstock conference. We’d like to see these going to deserving souls who would be unlikely otherwise to come to Webstock – maybe due to financial or personal circumstances. We’d like them to go to good folks who’d benefit from the talks, the people and the vibe that makes Webstock what it is.

Here’s what you need to know:

– You can’t enter yourself for this. People need to be nominated by someone else.

– Tell us who they are and why you think they should get a Webstock ticket. Include their email and Twitter handle (if they have one), so we can let them know if they win.

– If someone has had a free ticket to Webstock previously, they’re not eligible for the competition.

– We’ll let everyone know the winners on Tuesday 23 December via Twitter.

– Nominate someone by emailing [email protected]. Things are going to be a lil’ different this year at Webstock.

New venue, new format, new lots of things. Here’s the low-down on some of the stuff that’s new.

So we fell in love with the atmosphere of the St James. It’s beautiful. It’s the home of the Royal NZ Ballet and they know a thing or two about putting on a good show!

It’s resplendent. It’s got character up the ying yang.

It’s got theatre-style seating, rather than the round table thing we normally do. So this will be fun and different, and more akin to a theatrical experience. Which is kinda the vibe we’re aiming for. 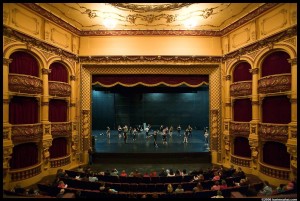 ONE STREAM TO RULE THEM ALL

We’re doing a single stream conference. 30 minute presentations. No more difficult decisions re which talk to attend. You can see ALL OF THEM! Neato.

While there’ll be wifi galore and power plugs a plenty available in breakout areas, we’re gonna be wifi-free in the main auditorium. This is to aid in your glorious Webstock experience: sometimes all that wifi, and tweeting, and blogging and people playing World of Warcraft next to you, can get in the way of experiencing something awesome. And that’s what we hope you’ll be doing – experiencing awesomeness.

Guess what? We’re not doing bags this year! Yep, we’ve finally taken on board lots of feedback from the past few years about HAVING TOO MANY Webstock bags.

And to be fair, we have a few too many ourselves… 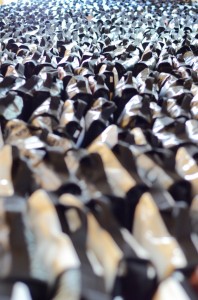 Tash’s collection of Webstock bags. She can’t get into her bedroom.
(photo credit: Ben Lampard)

And there will be bags from past years on sale at steal prices! Plus lots of other Webstock paraphernalia.

Let us embrace this newness while we relish in all the other usual stuff that makes Webstock really rather good!  We reckon it’s gonna be choice. Can’t wait. Eight sleeps to go! YAY!