Peter McLennan (@dubdotdash on Twitter) will be providing the sounds at Webstock and we’re really stoked. Webstock’s Ben Lampard caught up with him using the power of the internets and this is what happened.

Well Peter we’re very excited to have you providing the sounds at Webstock this year. Tell us a bit about yourself. 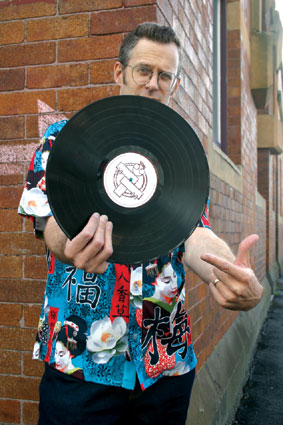 Oh, you want more? I discovered Len Lye and punk rock roughly at the same time, as a teenager. I later figured out a lot of Len Lye’s attitudes to art were very punk. I started playing guitar at high school in a band called the Worst. The name was apt. I ended up going to art school and working with film and video, while playing in a band called Hallelujah Picassos, who released two albums, a handful of singles, and played around the country scarring young minds as often as we could. Our approach to playing live was best described as “search and destroy”.

I went on to direct a few music videos for the Picassos too, which led me to work in TV for a while. I’ve also had other gigs as a music journalist, magazine designer, radio DJ, office cleaner, music video shoot runner (I got to drive Shayne Carter round once for a Bike video, we talked about Sly and the Family Stone) and more.

I like chocolate too. You were a member of the Hallelujah Picassos, easily one of the best live bands of the time. For instance, the gig you played in 1994 at the Otago University Student Union still ranks as perhaps the best live performance I’ve ever seen anywhere. Tell us a bit about the band.

We labelled ourselves as the four-headed beast. We all wrote, we all sang, and we all played at 100 miles an hour intensity onstage. We mashed up genres way before it became cool (see Sublime, Rancid) and had a great time playing to folks around the country. Our sound generally got labelled with a barrage of hyphens…. ska-reggae-hiphop-funk-punk. See? I’m proud to say that all my former band mates in the Picassos are still my friends.

What keeps you busy these days?

Currently I DJ on BaseFM and KiwiFM, write a music blog and make music as Dub Asylum.

Holy cow, and you found time to do this interview. What are some of your current influences and how would you describe your sound for those who haven’t heard you recently?

Oh crap. Seriously? I hate this question. It sucks harder than a vacuum cleaner. Current influences… Rhythm and sound, Lee Scratch Perry, Onra, Public Image Limited, Hypnotic Brass Ensemble, Ragga Twins, Julien Dyne, Carl Craig and ZILLION more… My sound is a mix of reggae, funk and hiphop. That’s the type of music I make as Dub Asylum, and also what I play when I’m DJing. Cept when I’m DJing there is usually some steel drums in there.

Yeah, sorry about that question, I thought it was mandatory when interviewing musician types. Too much Rip It Up as a kid. What 5 songs/albums/artists would you recommend to our readers?

And it will go on for days at Webstock ladies and gentlemen. Thanks Peter, we look forward to meeting you and hearing some of this stuff next week.

One thought on “Interview with the DJ: Peter McLennan”