The lineup just got even better! We are thrilled to announce the addition of three more speakers to our Webstock ’18 line! 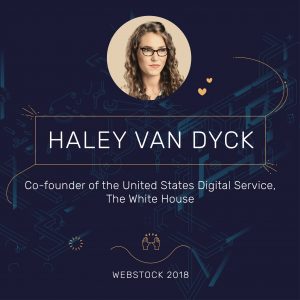 Haley van Dyck is co-founder of the US Digital Service and a key thought leader on Obama’s tech team since the 2008 campaign, where she helped develop the mobile strategy for the first Presidential campaign in history to use mobile and text messaging to connect with voters. Four days after the election she moved to Washington, D.C. to serve on the Presidential Transition Team with a small group of individuals who set the course for the Administration’s technology strategy, including writing the Open Government Directive and creating the first U.S. Chief Technology Officer position. 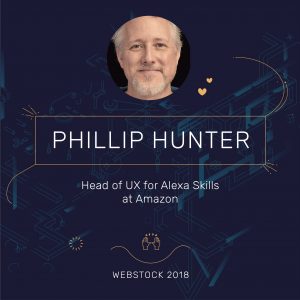 Phillip Hunter is Head of UX for Alexa Skills at Amazon. Prior to that he was UX Design Manager for AWS. He is passionate about how teams work, understanding systems, and the little details of interaction design that make big differences. Phillip has designed and created strategy for voice-based products and services for hundreds of customer service systems, Microsoft Cortana and Xbox, and now Amazon Alexa. 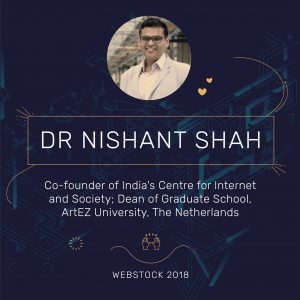 Dr. Nishant Shah is co-founder and board member of the Centre for Internet & Society in Bangalore, India. He is Dean of Graduate School at ArtEZ University of the Arts, The Netherlands and a Visiting Professor at the Institute of Culture and Aesthetics of Digital Media at Leuphana University in Germany, where he teaches in fields such as Digital Humanities, Computer-Human Interaction and Information and Communication Technologies for Development. His work on technology, identity and social and political movements focuses on the question of how we can remain human in a technological environment.

Wow! Our fifth Start-up Alley, in conjunction with BNZ! There was a great range of entries and some really strong applications. In the end, we had to choose six finalists. Here they are…

“This is an amazing opportunity. Givahoy is an ambitious startup looking to enable safe, easy and fun app-based proximity microtransactions in a cashless world, primarily for charities.

“We’re honoured and humbled to be selected amongst the finalists for Webstock Start-up Alley ’16. Can’t wait to see you all down in Welly! 🙂

Kandid is a mutually beneficial platform for New Zealand’s best developers and companies, to keep up to date and connect with the tech industry.”
Ezra Keddell – Kandid

“On behalf of the team at Leaping Tiger we are honoured to be selected as a finalist in BNZ’s Startup Alley!

Leaping Tiger is shaping a future for gamers where anonymity and faceless usernames are no longer commonplace. Wherever you are in the world you can find new friends, local communities and events – all in your local area. We are excited to share more about our vision with you this February.”
Jordan Lilley – Leaping Tiger

“We’re so excited to be a finalist in this years BNZ Startup Alley and introducing our products to even more people in 2016.”
Samantha Jones – Little Yellow Bird

“The Vizbot team are super excited to be selected as finalists for the BNZ Start-Up Alley 2016. Smart, simple building consents are another step closer to becoming a reality!”
Matt Cobham – Vizbot

“Wireless Guard is thrilled to be part of BNZ’s Start-up Alley and share our new smart security device with the Webstock’16 community.”
Taylor Howatson – Wireless Guard

1) Who are you?
I’m a musician and storyteller from the town of Everett, Washington, which is a town about thirty miles outside Seattle.

2) What do you do?
I used to tour around all the time stomping and screaming songs. But these days I’ve been building a houseboat, fixing up some old houses and cabins, and occasionally making up songs about giraffes and dead people.

3) How did you end up here?
Which “here” do you mean? This unlikely and lovely plane of existence, or Webstock? I’m still figuring out the first one, but I’m at Webstock because when my friend Amanda Palmer was performing here in 2011, she somehow convinced them that a scraggly accordion player who doesn’t really like social media would be a good fit. And this year they were kind and crazy enough to invite me back!

4) What are the most important issues currently in your field?
There’s a lot of talk about whether it is possible to make a living off of music in a world where fewer people are paying for music. I’m more concerned with how to make music something special and rare in a world where music is everywhere all the time. I suppose these things are not entirely unrelated.

6) Who are your greatest influences?
There are so many! Here are a couple –

Herman Hesse. His writings did something to me – caused an almost hallucinogenic disorientation with ultimately a very specific spiritual trajectory. At a fragile point, it helped me find my path.

Lois Jameson. My sixth grade teacher. She was one of the first people to ever really inspire me to be a creative person and live an unconventional life. She gave me lots of encouragement early on, but what resonates more now is that she was very perceptive about some of my faults. She died shortly after I was lucky enough to be in her class and I think of her quite often still.

7) Tell us three things you love (eg movies, albums, songs, poems, artifacts) and why.
I love so many things!
You have to narrow it down!
Hmmm…. I’ll just pick a category, how about Tall Things?!

Watts Towers
These sculptures were built outside Los Angeles by a single man over the course of decades. Nobody knows why he built them. After he left, the city wanted to tear them down, but somehow they still stand. I wept when I first went there – it struck me as one of the most beautiful things I’d ever seen – something about the mad tenacity of creation.

“The Two Skyscrapers Who Decided to Have a Child” by Carl Sandburg
This is from a collection of children’s fairy tales called “Rootabaga Stories”. The stories feature vegetables and accordions and all of my favorite things, but this little story, overflowing with heartbreak and whimsy, is the one I always come back to.

Giraffes
I want one.

To celebrate the Webstock Week that was, the fine folks at Serato are putting on a shindig at the grand Embassy Theatre on Friday night. Thanks Serato!

There’ll be lashings of hearty food, an excellent assortment of drinks (both alcoholic and non-alcoholic), and The Amazing Travelling Photobooth will be in action to capture your precious party memories.

There’ll be spaces for listening and conversing, and spaces for dancing and getting your jiggle on. Smooth sounds and eclectic, atmospheric electric boogaloo will be provided by DJs Jizmatron and Coco Solid.

Doors open at 5.30pm and we’ll go till late. You’ll need your nametag to get in.

(You are welcome to buy a ticket for your special someone if you’d like to bring ’em along. Tickets are $65 and can be purchased  from the registration desk anytime after 10am.)

1) Who are you?
This is a weird question—you sent me this email, you should know who I am. Anyway, I’m Frank Chimero. I’m a designer who writes. I live in New York.

2) What do you do?
See above. I also spend a lot of time thinking about dogs and music. Again, another weird question.

3) How did you end up here?
Took the Q train to Atlantic, then got on the Long Island Railroad to Jamaica Station, then got on the AirTrain (not an actual train in the sky, but one that goes to the airport) out to JFK, then flew to LA, got on another plane, lost a day in the air, landed in Auckland, then boarded a little puddle jumper out to Wellington. Other than that, I spent about a decade designing publications and things for the internet, and about seven or so years writing about everything I learned/decided/unlearned.

4) What are the most important issues currently in your field?
I design things for the web, and the web’s problems are the world’s problems: privacy, equality, corporate ethics, consolidation, wealth distribution, and an over-saturation of loud, fast, and stupid. Now I’m bummed. See what you did?

5) Tell us more about your talk at Webstock – why should folks come listen?
Here’s the thing: we actually do a pretty poor job of getting down the big patterns of making things for screens. Maybe we take our knowledge for granted, maybe we lack words, perhaps its the absence of a catchy conceptual framework—whatever. At the end of the day, if you want to honor making things for the web as a proper craft, I believe it’s necessary to think about the natural grain of the web and how it guides your work. You need to understand it as a material to work with and not a canvas to paint on. It’s not blank—the web has certain things it wants to do. I’ve been trying to spell out my version of these things for a while. This talk is the back half of a lecture I gave last year called What Screens Want, where I dig into what it means to natively design for screens. That last talk focused on flux, or the capacity for change. This time I’m tackling edgelessness.

7) Tell us three things you love (eg movies, albums, songs, poems, artifacts) and why.
This is 30 minutes of kinda ambient synth music for plants. And I like it, too! Funny story: the only way to get this record was to buy a mattress from a Simmons dealer in southern California in 1976. Logical.

Let’s spend a long time looking at this photo of Twiggy and Richard Avedon dancing at work. Let’s not forget to have that much fun sometimes, ok?

This drawing, for obvious reasons.